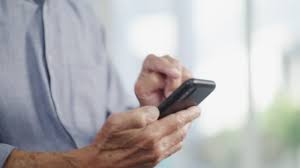 In the movie nine and half weeks, Mickey Rourke (male actor) sends a note to Kim Bassinger (female note) with a bouquet of flowers, inviting her on a date with him. It’s 1980’s then.

As I watched the particular scene, I wonder when was the last time, a guy must have invited a girl on a date by sending a note and some flowers.

I mean, we text or maybe call in some cases. But it’s mostly texting.

And as my wondering became curiosity, deeper questions leaped up to my mind.

The larger question that kept it’s presence in my mind, was how texting has changed the way men show up in courting women?

While sitting in solitude to understand the silent effect, advent of texting has played, I went to good old days of Landline calling. This was pre cell phone era.

I reflected how men would communicate to their desire girl during those days. Landlines were not cheap mode of communication as what’s app is. And in most household it was max 2 different landlines per family.

Hence the room to call up a girl, and talk about stuff other than asking her out was very little to none.

Understandably, men were more direct to the point.

If we go back to 60’s, 70’s and 80’s, where landline was luxury of the few, a guy only had a in person chance to converse with a girl. Hence sending notes to ask a girl on a date was more prevalent.

In essence, my point is, men avoided unnecessary chit chat with girls they wanted to court in order to mate with them. Because access to girls beyond in person was expensive those days.

No wonder the concept of “Friendzone” didn’t exist then.

However with advent of texting and inexpensive access to girls, there has been shift in dynamics in the way show up in space of women.

Men initiate and get into lot more unnecessary conversations with girls, they want to court. Which takes them further away from actuality.

Think of the following scenario:

And as you sitting in quiet solitude, you think of that girl you like, and you have a strong urge to make yourself heard or hear from her, so that you spend more time with her, if not physically then virtually.

And because she is just a whatsapp text away, we fulfilled our urge by messaging something.

Something that holds no strong meaningful space between you and woman.

Instead of messaging, “Would you care to spend some time with me this weekend?”, we message, “Wassup, how’s it going?” and continue along those innocuous lines, until an hour later it fizzles out.

(Get away means, we can always text her tomorrow again).

And this is something we men don’t realised.

Texting has brought us lot more closer to better possibilities, but it has also compromised the qualitative aspect of our interactions with a girl we desire.

As they say, “the more you say, it’s quite likely you will end up saying rubbish too”.

This seems to hold true with texting.