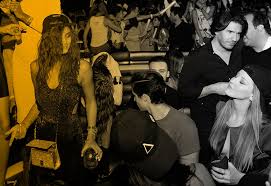 When I first heard Zan Perrion (Dating coach) saying that nightclubs are fools game, I dismissed his notion. He was asked about meeting and mating with women in nightclubs, to which he said that nightclubs seems abundant, but they are really not so. This was years back.

As I have spend more time than most men in social environments, both in day-time and night-time, I too feel that Zan’s notion of nightclubs is closer to truth.

In my personal experiences in night time social venues, women are lot more open socially to mingle and obliterate the physical space boundaries than usual day time venues like cafes, restaurants, etc. Men who are mildly socially savvy, are given the liberties to touch women in social sense; and women also reciprocate touch. This “Social Openness” give illusion to men that there is a large window to get sexually intimate with women.

As a matter of fact, women in nightclubs, tend to have closed sexual energy or rather least amount of sexual openness.

The illusion of abundance comes from the fact that men are NOT trained to distinguish an open social vibe of women and sexual chemistry with women.

In my personal experiences, which is limited to India, I have encounter lot more sexual open energy from women in day time venues than nightclubs.

The importance of being aware of this dynamics cannot be under represented, because as and when a man becomes aware of this fact, the weight and pressure to get laid that night is diminished significantly. Which in turn, gets him out of his head, and makes him more lighthearted man to be with.

Having said all of this, I am not writing off one night stands or any intimate encounters with women in nightclubs. They do happen in all parts of world, including India.